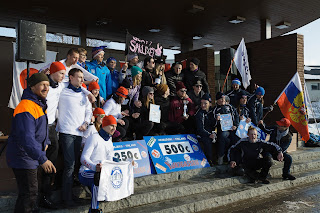 Yukigassen is Kemijärvi's annual organized snowball fight competition. The sport originated in Sobetsu in Japan, twinning with this town lead to it's spread across Europe to Kemijärvi and later to Norway, Russia, and Sweden. The event is played as a tournament, where groups and game order are chosen by lottery. The team must fight troughout the competition with the same players, and help form reserves is not allowed. For each match, 270 snowballs are made by the participants using a snowball machine.
The Yukigassen snowball fight can be seen as a joyful event, a techincal challenge, a communal performance, or a crazy stunt. Each team sees it its own way, but everyone hasfun. This year Yukigassen European Championship will be held in Kemijärvi for the 22nd time from 31.3.-2.4.2017.

Registrations from here.
Also to the Summer Yukigassen - please note the text summer - to the registration form. ThankYou.